Ah, the French. Famously portrayed as the most romantic of all the cultures. Who doesn’t want to be wooed in Paris, with a view of the Eiffel Tower, and isn’t that how it always happens? Well, I’ve been dating my Frenchman for a few years now, and we recently got married, so I’m about to give you the real scoop. Am I promoting clichés? Maybe. But it’s all in the name of fun. For anyone out there in a relationship with a Frenchman—I hope you can relate!

Disclaimer: I love my Frenchman very dearly, and he approved of this post before I clicked publish!

1. His love of stinky cheese knows no bounds.

When we went to Lille on our honeymoon, Jonathan couldn’t wait to try Maroilles, a regional specialty and funky little cheese that smells like a garbage dump. I love trying new foods, but after catching a whiff from a street food vendor, I’ve never wanted to gag more. I’ve heard the taste is rather mild, but I was unable to try for myself. The fact that we were on our honeymoon was not a deterrent for him. He was happier than a pig in…mud.

In the days when we were flying back and forth to spend time with each other, he often brought me wine and cheese. Usually a Camembert. And it wasn’t for me. When picking out cheese in the grocery store in the United States, he often goes for cheese that he knows was made in France. This practice seems reasonable, until you know his true motive. He says that cheese that has survived an airplane ride is the best kind of cheese. Due to the changes in its environment, it matures and ripens even faster. We have different perspectives regarding the threshold of ripeness. Thankfully, we recently purchased a Tefal cave à fromage (cheese cellar) which has been life-saving for our fridge (and probably our marriage, too!).

2. His cooking skills are top notch.

Day 4 of the Covid-19 quarantine and Jonathan’s breaking open a can of raviolis. He spruced it up with some crème fraîche, herbes de provence, cumin, pepper, and paprika (for color!). I’m not going to lie. It wasn’t bad. This was perhaps not the best example to provide of his culinary prowess, but you get the idea. Some people consider canned meals already prepped, but he never opens a can without adding at least five ingredients. Even a jar of bolognese tomato sauce receives the love of some sautéed onions and tomatoes along with various spices.

I consider myself a good cook, but he’s clearly on a whole other level. You see, for me to be a good cook, I need a good recipe and all of the ingredients on hand. I cannot just come up with something on the fly. He’s one of those people who can just take a taste of something and tell you exactly which spices it needs. Even when there is nothing in the fridge, he somehow puts together a filling, extravagant meal, with smoked salmon on the side. Nobody knows where the salmon comes. I’m also convinced that every Frenchman is preprogrammed with knowledge of the ratios for a perfect salad vinaigrette. Another mystery of the universe.

And at most snacks. His cutlery skills will in fact make you feel like a barbarian at times. Before Jonathan, I was known to savagely bite into apples, peaches, and melon wedges. Proper French etiquette dictates that fruits such as these are cut before eaten. True story: I once witnessed a French co-worker peeling her grapes with a knife. She did it with such determination and confidence that I questioned many of my life choices.

Jonathan usually uses a fork and a knife to eat finger food classics such as wings, pizza, and burgers. When we’re in the States, I find this habit to be slightly embarrassing, but ultimately endearing. (And I have to admit—It’s even rubbed off on me a bit.)

4. He’s very sensitive to the cold.

My Frenchman is from New Caledonia, a small tropical island, which simply means that he complains about the cold even more than mainland French people. The other day, I had the window open. He actually said to me, “It is like the fridge in here.” Ok, it was only 55 degrees (13°C) out, but I do think he was being a bit dramatic. When I laughed hysterically, as I often do, he told me that he was going to catch a cold. He then reminded me that he was “born in the ocean” (we’ve been mostly speaking in French lately, so his English has gotten a bit rusty) and therefore requires more warmth than the average person.

Room temperature is a recurring source of disagreement in our household, and I suspect secretly opening and closing windows on each other will be a lifetime thing. As the more stubborn of the two of us, I am ready for this challenge.

French men get straight to the point. (This may in fact be an overgeneralization that I’ll lovingly sprinkle over all French people.) There is no holding back if something is not good or lacking in some way, so don’t expect critiques to arrive sugar coated. They see it as being honest. Small calcium deposits left on the sink you spent an hour scrubbing? Don’t worry—he’ll let you know!

If you plan on asking your Frenchman for his opinion, be sure you’re ready to handle his response. Here’s a recent example: During our Paris lockdown, I’ve been trying to work out at home every day. I jokingly asked, “Do you think I’ll have a six-pack when this is over?” He (not jokingly) said, “You have to get rid of the mush first.” After quickly assessing the situation and realizing his error, he added, “I love your mush!”. Not much better. It’s ok, ladies—I plan on getting a lot of fuel out of this mistake. You know what I’m talking about.

6. He compliments your appearance.

Direct feedback is really nice when it’s a compliment. Frenchmen actually notice changes in your appearance. New haircut? New shirt? Plucked your eyebrows for the first time in a month? Your Frenchman will notice these things, and he’ll let you know when you look good. I painted my nails this past weekend. Jonathan said, “Hey, it’s your wedding color.” *Tearing up as we speak.* (So what if I only own two nail polish colors at this time, and he had a 50/50 chance?)

P.S. It’s essie Mademoiselle, if you want to know.

Related to this, Frenchmen tend to appreciate more of a natural look, in terms of make-up. This really works in my favor since my skills are fairly limited in this area. It’s especially nice to be complimented when you’re looking like your natural self. I may not master that je ne sais quoi, effortless yet put together style of the French woman, but my husband says that I have la tête d’une américaine (the look of an American), and I’m just going to have to believe that that’s a compliment. Don’t kill my dreams now.

Frenchmen are often portrayed as romantic and dreamy. It’s what all the movies tell us. And that accent! I, however, married a guy who works in IT. The nationality in this case does not matter. Do not expect handwritten poems and love letters from any guy who works in IT. These concepts are simply incompatible. If you’d like to be swept off your feet on a regular basis, pick a French guy in a different profession, and then let me know all the juicy details over a glass of wine. I’ll be waiting.

Have you ever been in a multicultural relationship?

7 Signs You’re Dating (or Married To) a Frenchman 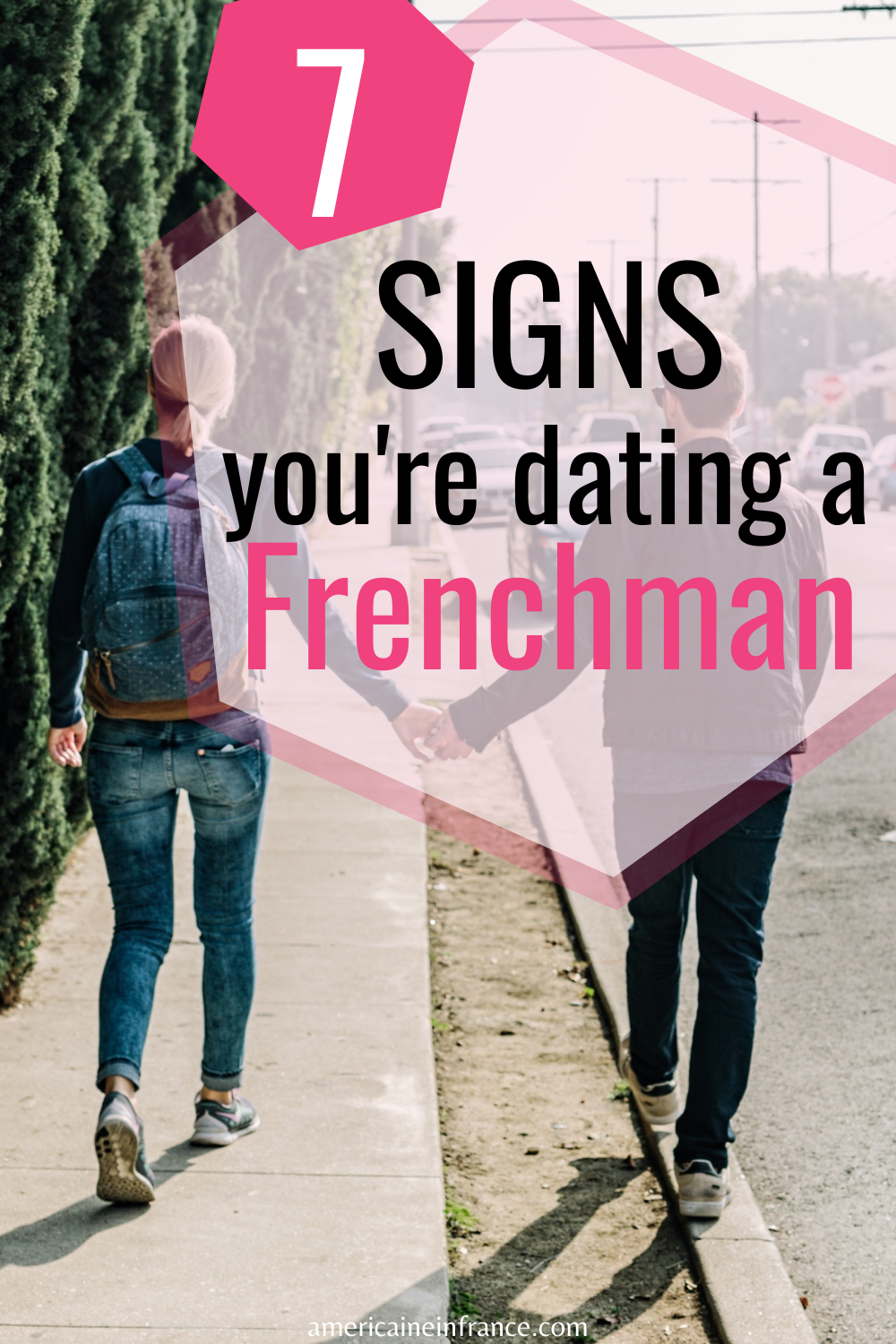