Driving by car is a great way to explore France, travel on your own schedule, and see areas of the country that are harder to access by public transportation. As an American, you’ll find that driving in France is not all that different from driving in the United States.

Whether you are planning to drive in France in a rental car as a tourist or you’ve just moved here, it’s essential to take note of the rules of the road. Let’s look at some of the key differences and important road signs so that you know what to expect when driving in France.

Can you drive in France on a US license?

As a short-stay visitor, you can drive in France on your US driver’s license. It’s a good idea to bring an International Driver’s Permit (IDP) with you. This is simply a translation of your driving license. It is not valid on its own and must accompany your actual driving license. You can obtain one quickly, easily, and cheaply from your local American Automotive Association (AAA).

If you’re in France for a longer stay, keep in mind that your American driver’s license is only valid on French territory for one year. You’ll need to consider exchanging your US driving permit for a French permit or going through the process of preparing for the French driving tests and applying for a license in your own right.

Can you rent a car in France with an American license?

You can rent a car in France with a US driver’s license. An IDP (see above) is not necessarily required. The rental agency can ask you to present an IDP, but they might not request it at all.

Each rental agency has their own terms and conditions for renting. Most car rental agencies in France impose a minimum age of 18 years (or more for certain vehicles) and at least one year (sometimes two years) of experience. Additionally, there are supplementary charges for younger drivers. Anyone below the age of 25 is generally considered a young driver.

It’s beneficial to shop around when choosing a car rental agency. Compare costs as well as terms and conditions.

Driving in France is not too different from driving in the United States and should be fairly manageable for an American to handle. Here are a few noteworthy differences to keep in mind before getting behind the wheel. This is based on what stood out to me!

While the United States is ruled by stop signs and traffic lights, France is primarily ruled by traffic circles. Known as un rond-point in French, roundabouts are super practical, allowing for a continuous flow of traffic.

In truth, you can go around as many times as you like in order to verify signage and make sure you head off in the right direction. If you’re traveling around more than half of the roundabout, keep to the left lane (if there is one). Keep your left turn signal on until you are ready to exit. A right turn signal will allow others to know that you are exiting. Be sure to check your blind spot on the right before leaving the rotary.

Priorité à droite is a fundamental French driving rule that can cause confusion for foreigners and natives alike. The basic tenet of priorité à droite is that you must yield to cars entering from the right. In this way, even if you are driving along a main road, you might find a car suddenly pulling out in front of you from a minor road. This can be confusing (and dangerous!) for Americans who are used to having priority on a main road.

Although priorité à droite is the default rule for determining who has the right of way, there are so many signs around France indicating when it is not in effect that one wonders why they didn’t just repeal this rule in its entirety.

At a rond-point, if we’re abiding to priorité à droite, those in the traffic circle are supposed to yield to those entering. Indeed, this is the case for perhaps the most frightening of all the French roundabouts… I’m speaking, of course, of the rotary around the Arc de Triomphe. However, most traffic circles throughout France these days have a cédez le passage sign for those entering to yield to those already in the roundabout.

Another indication that drivers on the main street have priority over minor streets is if you see a solid white line on the minor road. This signifies that the driver on the smaller road needs to stop, thereby yielding to the cars already on the main street.

Right on Red? Don’t even think about it!

As you roll to a stop at a traffic light, resist the urge to creep forward in preparation for making a right turn on red. Unlike in the States, this is not the default. Right on red is not allowed in France unless otherwise indicated.

Read more: Things You Can Do in the United States That You Can’t Do in France

Take note that speed limits are indicated in kilometers per hour (kph), not miles per hour (mph) 😉

This is not a big deal and certainly something you can get used to, but it can be a bit disconcerting when you’re unsure! I found that the GPS on my phone is often, but not always, accurate. Keeping up with traffic can be a good rule of thumb as well.

It is rare to see police pulling cars over. Speed limits are most often enforced by radars. If you’re speeding, you’ll be sent the fine by mail. This is also the case if you are renting the car.

Autoroutes in France are highways designated by the letter A followed by numbers. They are generally the most efficient route to take when driving for a long distance across the country. The speed limit is 130 kph but this decreases to 110 kph when it’s raining. There are often tolls (péages) to use these motorways which you can pay by credit card or cash.

When on an autoroute or other major motorway, you should drive on the right and pass on the left. If you are not actively passing someone, you should move over to the right lane. When there are more than two lanes, the slowest vehicles (like trucks) typically travel in the farthest right lane. In this case, you can travel in the middle lane.

When in a town or rural area, communal roads can be quite narrow in some areas. It’s often necessary to pull off the road slightly in order to provide enough room for a car coming in the opposite direction to pass you.

Notoriously busy, driving in Paris is not for the faint of heart. It can be a bit stressful, so if you can avoid it, I would strongly advise against driving in Paris. Public transportation in Paris is great and will probably get you where you’re going faster than taking a car.

However, sometimes it’s unavoidable, like if you’re renting a car to head out of the city for a day trip. Here are some tips for driving in the capital:

Have you ever driven in France? What advice might you offer to an American driving in France for the first time?

Tips for Americans Driving in France 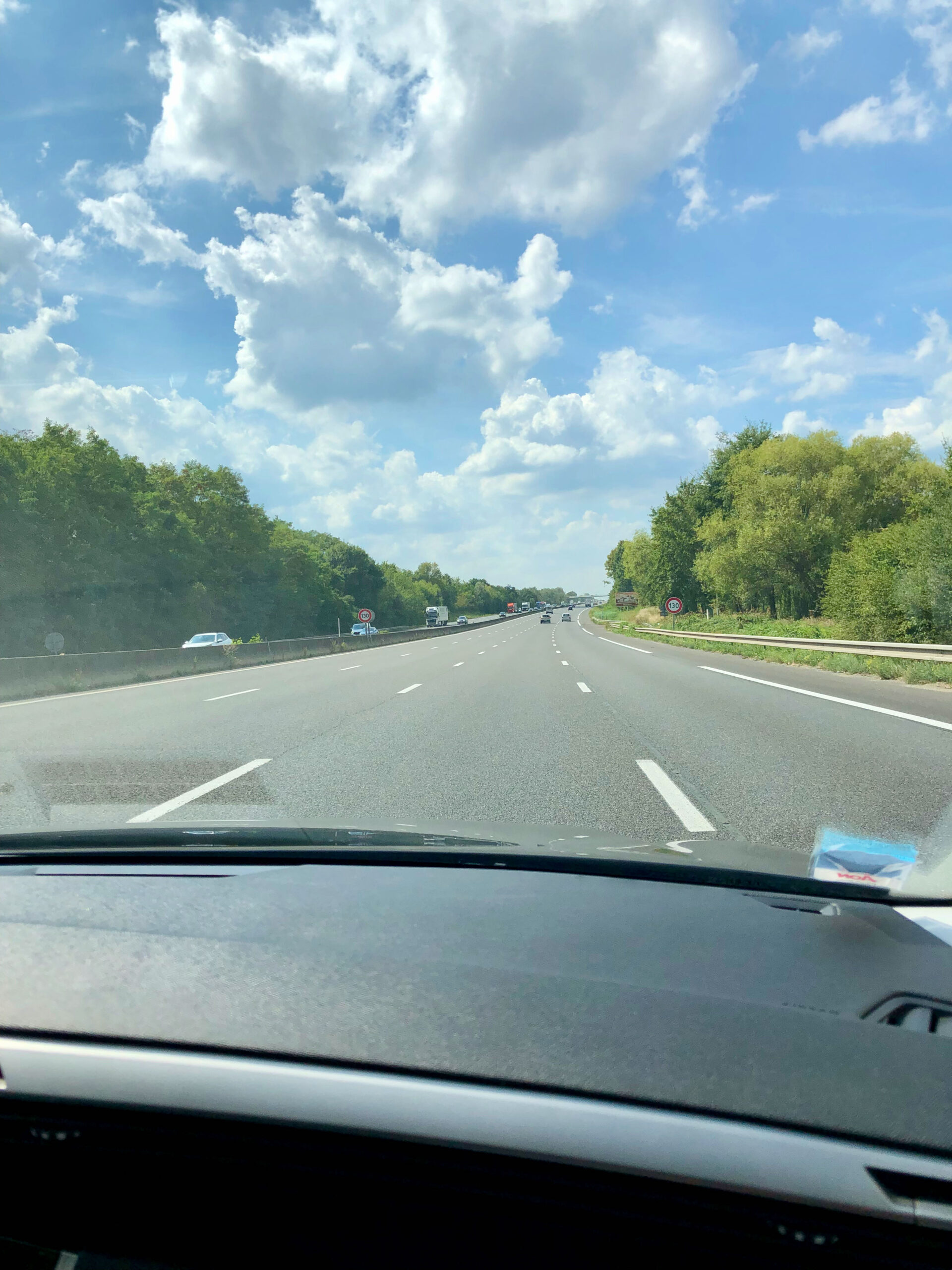 Tagged on: driving in France